One of the best things about writing historical novels is deciding the location of things. Which police station for the inspector? where should he and his wife live? where did the murder take place?

The joy of this is in the tangle of old maps and sources to be sought out and studied. Sure, a street in London may look like this now, but what about then? You can’t set something on Shaftesbury Avenue when the street didn’t exist in 1860.

[My first mystery, Murder at Old St. Thomas’s, was actually based on a question involving location. Old St. Thomas’s hospital had existed quite nicely in Southwark, not far from London Bridge, for many years. Then it was forced to move because of the railway, and spent 9 years at Surrey Gardens before a new hospital was built on the Embankment, where it now stands. What dislocations and confusions would that cause? Traditional histories skipped right over the Surrey Garden period, and I was curious.]

So now I’m working on the fourth book, a prequel. I needed Sergeant Slaughter and his wife Ellie to reside in the City, because doing so was required for everyone working on the City of London police force. I read about the City then, and I “walked around” in Google street view, because I like to use buildings that still exist when possible (one of the joys of abandoning the medieval era for the Victorian). Much of the area is banks and businesses, but I needed a home, and one you could have for a sergeant’s pay. I liked the look of Philpot Lane, then I found this entryway: 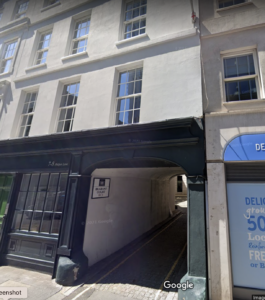 It leads to Brabant Court, so I looked it up to make sure it was still named that. Then I found several current ads for flats on Brabant Court and Philpot Lane. I read that one building had recently been converted into flats as “its original use” after the private 18th century home had been divided up. A good place, then. I had read somewhere else that there there had been a wine merchant there. So I started writing a scene where the sergeant’s wife is sick of the smell of sour wine drifting into their lodgings. Then later I wrote a scene where she is out of kindling, and goes downstairs to borrow some straw, figuring straw would have been used in crates for wine bottles. So I needed the name of a wine merchant.

And the London Directory (thanks, Google Books!) helped me out. Now of course I couldn’t find one for 1860 (whatever year you really need, you won’t find it) but I could find the 1852 and the 1862 versions. I began with 1862. Google wouldn’t let me download it (oh I do miss Google Books Downloader) but I could search, so I put in “Brabant”:

Hard to read, I know, but in 1862 we have a Frederick John Duckworth and Co., wine merchants in Brabant Court. Were they there back in 1852 also? I searched for Brabant Court and read each listing, and found not one, but quite a few wine merchants (and a solicitor, and a tea merchant).  And yes, he’s one:

He’s moved from #2 to #3 but it’s the same one. So I can be pretty sure that if Ellie goes downstairs, it can be to Mr. Duckworth’s business. Plus I can have the solicitor and tea merchant there as well. And at best guess there were at least three wine merchants in the court, so yes, it would smell like musty wine.

4 thoughts to “Those wine merchants”