I continue to seek ways to use annotation as discussion, instead of a discussion board. Last year, I road-tested Kami (commercial) and Hypothes.is  This term I have been using both Hypothes.is and Perusall, which work with Canvas. Sort of.

Last year I piloted the new Hypothes.is/Canvas integration. I was excited about the ability to use SpeedGrader to grade annotations, even though some people were against the very idea.

It worked in that I could:

1) Embed in a Canvas page or link out

I posted last year about embedding Hypothes.is in Canvas. I could create hypothes.is-enabled pages to be embedded in Canvas. This turned out to be a poor idea – the Canvas menus on the left (there are two) take up too much screen space. To add both a document and a right-hand annotation sidebar didn’t work.

But there was still a real estate problem, even when linking out. Each week the textual primary sources were there on HTML pages to be annotated. I had to change CSS to reduce the width of the web pages to account for the Hypothes.is sidebar, which tended to overlap the text. This made highlighting difficult.

2) Easily follow conversations, which had far more participation that a discussion board

1) Separate accounts made it hard to identify students

The two separate accounts also made it hard for students to know where to “sign in”, Canvas or Hypothes.is.

2) Groups kept class private, but choosing a group was one step too many

You can make a group for a class (another step for students to sign up for the group), but the default Hypothes.is setting is always Public. So students would not use the drop-down to choose their class group, and their annotations would end up in Public so wouldn’t be counted properly.

Again, there were too many steps. After creating the annotation, a separate Submit button was required to have it work in SpeedGrader by loading as an assignment. If they didn’t do scroll down and use that button, SpeedGrader couldn’t find the annotation, but the student thought they made one.

4) The Gradebook would sometimes show a “URL submission” for students whose annotations could not be found anywhere, so it was unclear whether the student posted at all.

The integration and double-account problem was so frustrating, that this term I did not integrate with the Gradebook. Instead of using the Hypothes.is LTI, I just created via pages (by just adding http://via.hypothes.is/ to the front of the page URL), and linked out from Canvas. The separate account names were still a problem, but it was a small class and I  had them do self-assessments where they quoted a few of their own annotations. I used Jon Udell’s query engine to track numbers. The engine didn’t work well using the page URLs (it didn’t report all the annotations), but if I put in each student’s account name separately, I could at least compare how many annotations they did with their self-assessment.

So why use Hypothes.is at all?

First, its business model is superior – it is built for education by wonderful people.

Second, Hypothes.is is the best choice for using with HTML pages. Using web pages allows multi-media elements, as part of the web page, to be “assigned”. For several documents I have audio files, and want a play button on the page so students can hear the document read to them by a person.

This year I’m also trying Perusall, inspired by Dallas Hulsey’s post over in the Canvas Community. Here I went for full Canvas LTI integration, or bust, on one course. 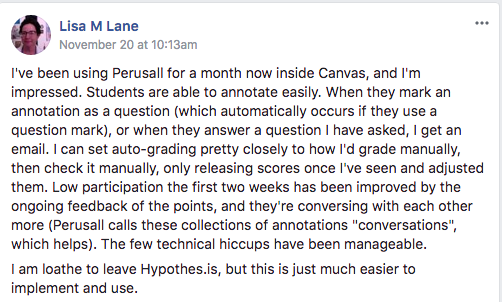 My colleague Laura wanted a demo, so I did one (yes, it’s 9 minutes long!).

Some comments on Perusall:

1) Auto-grading is creepy and a tool of the devil, and I love it

Although I hate the very idea, the auto-grading feature makes it possible for me to spend more time talking in the annotations to students. I have it set now at 4 annotations, but that isn’t really a set number – it means the equivalent of four good annotations. Perusall defines good with some sort of algorithm that includes length of the comment, but also other mysterious factors. So the trick is getting that number right for what you want, and being specific about what students are expected to do.

I put them on the first week and kept referring to them. Invariably students who didn’t earn full points just didn’t do enough. When they did a variety of activities, everyone got full points, and had more fun, and conversed more. 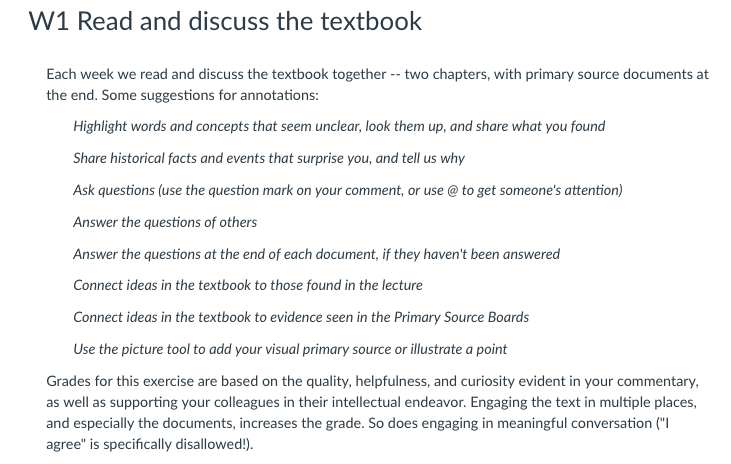 3) The question mark thing is cool 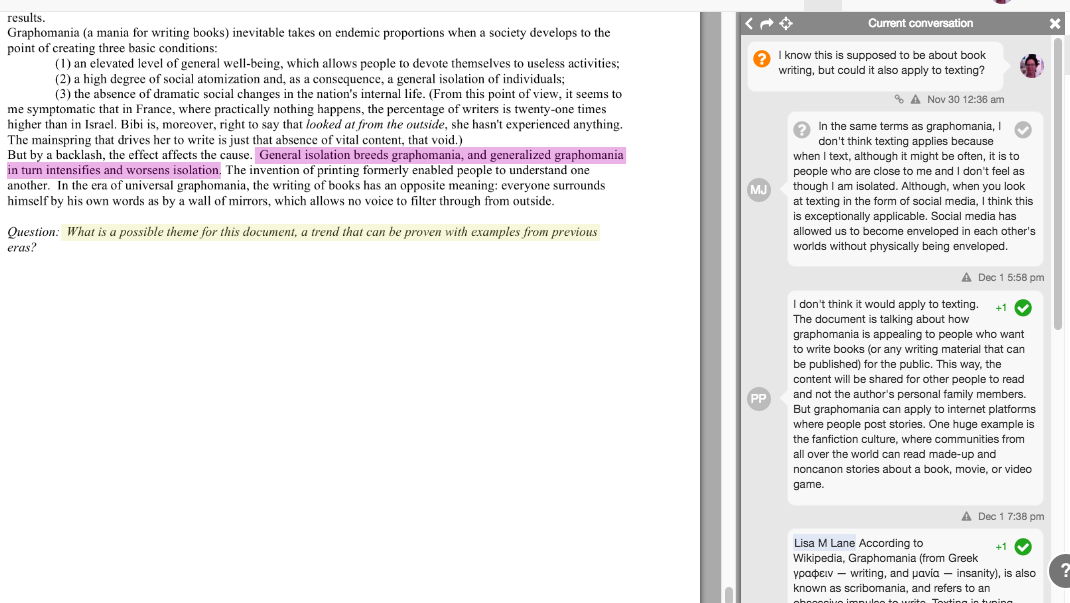 4) Images and videos are allowed in the annotations

This made the comments so much more interesting, once students realized they could do this!

6) The only way to access that week’s reading is through the Perusall interface, so students don’t get confused.

It opens automatically as an assignment link. The readings can be downloaded and printed from there if they want a paper copy. So no links to a complete “booklet”, just links to that week’s reading.

In fact, the only real drawback is:

PDFs only. You cannot do web pages, so multi-media doesn’t work as a source for discussion. Some instructors feel this is so important, they’d rather use a tool like Voicethread.