I confess I am struggling to write my current mystery, and when this happens I sometimes allow myself to disappear down rabbit holes of historical research, following a trail.

Deciding that my victim was to be poisoned instead of garroted (which would have been unlikely for the accused to have achieved), I began researching poisons. Arsenic would be the obvious choice, but I was tired of arsenic: in 1860 it was in everything from wallpaper to rat poison, and there had been an accidental case of poisoning in commercial candy in Bradford two years before. The more I read about it, the more I realized it was appropriate for a slow poisoning, given in small doses over time to look like a natural illness. I needed a quick death. So, cyanide. It turns out many people cannot detect the trademark “burnt almond” smell, and it was quick and easy to obtain as “prussic acid”.

A bottle lying around the victim’s flat? Perhaps. If so, finger-prints would be nice. But everyone knows 1860 is too early for that; it wasn’t until 1887 that finger-prints were part of police methods. As a historian, however, I’m aware that things are often known earlier than we suspect. So what was the state of forensic science in 1860? Wikipedia mentioned that Sir William Herschel was doing it in 1858:

I followed that footnote and sure enough, I found The Origin of Finger-printing by Sir William Herschel, explaining how he knew that finger-printing ideas were much older, and that there had been isolated cases of a handprint or even a tooth being used to verify identity.

Sir Francis Galton, however, has pointed out that in our own times the engraver Bewick had a fancy for engraving his thumb-mark, with his name attached, as vignettes, or as colophones, in books which he published. As a boy I had loved Bewick on Birds: I regret that it is not now to be found in our library. Galton’s remark has reminded me that I used to see a thumb-mark there, as well as I recollect, in an ornamental title-page.

So naturally I had to find Bewick on Birds, in my library of the web. They had a copy of A History of British Birds (1832) at Google Books and I looked through the first few pages, but no luck. Certainly it wasn’t on any title page. So I image searched for “Bewick Bird thumb-print” and found two images. The Cleveland Art Museum said it was on page 180, so I went to look at a prettier version, at the Wellcome Collection, an 1847 edition. Not in the title pages nor on page 180, so I began scrolling through every single page.

Bird after bird scrolled by. Each bird had his/her portrait at the top of a section, then at the bottom of each section was some other illustration: a house in the snow, a team of oxen ploughing. Some of these images were rather strange, like one man carrying another, or a funnel in a bottle. But on a page about the Wagtail, which had no bird image at all, it was at the bottom: 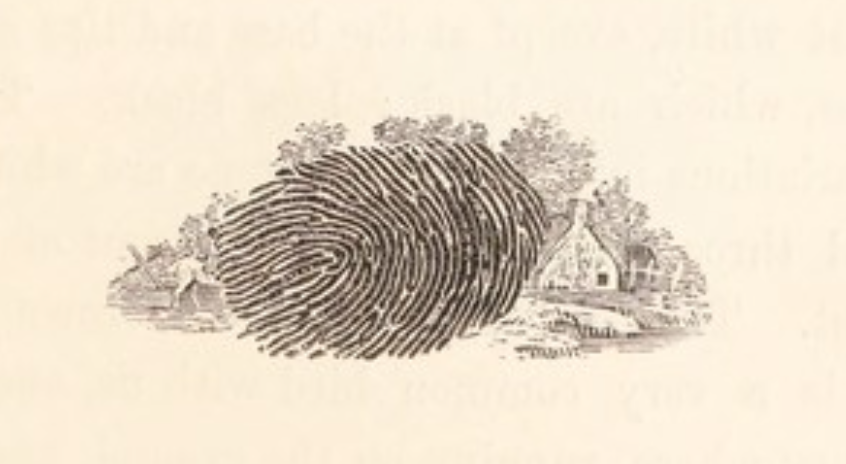 A lovely thumb-print which, I must assume, was Thomas Bewick’s.  (I have a bit of a soft spot for Bewick anyway, not because I know his bird books but because I’m very fond of the Bewick’s wren. One nested on a counter outside my kitchen, and I accidentally flooded her out watering a plant, and since then I watch for them and am more careful, understanding that they nest a few feet from the ground and sing the most lovely song.)

Obviously Sir William’s memory was a bit off as to the thumb-print’s location, but there it is.

So now I have every intention of working Herschel and Bewick and finger-prints somehow into my mystery. When writing fiction, research rabbit holes are rarely traversed in vain.